The American naturalist and cryptozoologist, Ivan Terence Sanderson, coined the term OOPArt as the acronym for out-of-place artifact.

An OOPArt is a term for an object of historical, archaeological or paleontological interest found in a very unusual or seemingly impossible context. In archaeology, an OOPArt is any object displaying evidence of a technology that, according to uniformitarian or related paradigms, ought not exist in the particular geologic stratum in which it rests.

Simply put, an OOPArt is viewed as evidence of modern or even more-advanced technology from an ancient culture.
An OOPArt refers to the actual object itself.

In response to the October 2000 declaration made by the Queenslad researcher Ronald Pegg regarding his claim that he had found Evidence of Time Travel, in April 2009 a new term was coined by Eddy Pengelly in order to introduce some of his findings.

This is where documented accounts from ancient myths, stories, and texts reveal where ancient people describe the contents of an oopart in their own words and/or depict the oopart itself - which they apparently saw and/or held in their own hands.

Thus a DOOPArt is where the description and contents of a modern technological object have been found in very unusual or seemingly impossible contexts, such as being depicted in hieroglyphs or documented in ancient myths and legends as well as what are now known as religious texts.

But unlike the discovery of an out-of-place artifact during an archaeological dig, in these DOOPArt cases, only the documented descriptions of the oopart encounter have been discovered - and not the oopart itself.

Also unlike existing oopart studies which deem the ancient cultures themselves as having technology equal to or more advanced than our current level, a DOOPArt specifically describes certain mid 1990s technology, that has somehow been seen operating in the past.

Here are four modern technological objects (DOOPArts) which Pegg claim have been seen in the past and were subsequently described in ancient myths, legends & stories and documented in related sacred texts. 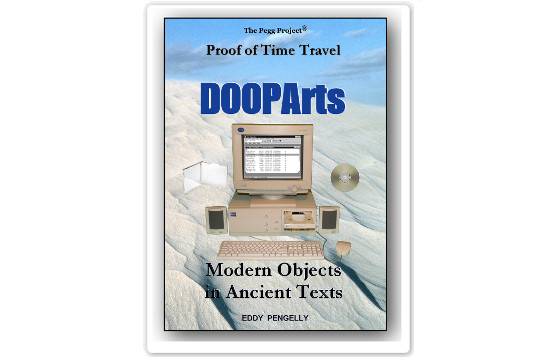 Documented - Out - Of - Place - Artifacts

This Book previews a cross section of ancient texts from 12 Countries over 25 Time Periods that document Human Time Travellers, and describe certain mid 1990s Computer Technology and the pictures from within 3 cd-roms also taken back. 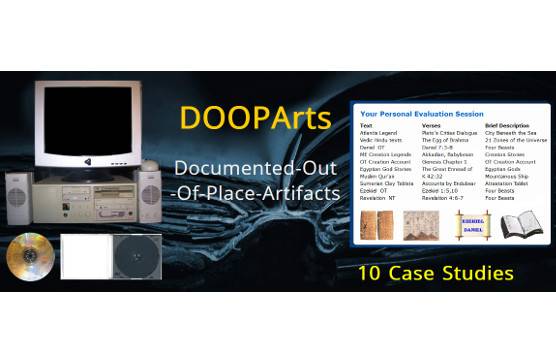 Ronald Pegg asserted that pictures from the Ancients cd-rom were shown to many ancient people who then documented their encounters with it in their personal texts and stories. This Evaluation allows you to come to your own conclusions.